What a great way for RTA to begin the New Year…

The Roads and Transport Authority (RTA) has just announced that Route 2020 will be open to the public on January 1, 2021.

According to His Excellency Mattar Mohammed Al Tayer, Director-General, Chairman of the Board of Executive Directors of the RTA, Route 2020, the extension of the Dubai Metro line from Jabal Ali Station to Expo 2020 station, would start commercial operation on January 1, 2021.

He went on to state that, ‘The initial operation phase would cover four stations, namely: Jebel Ali (interchange station with the red line), The Gardens, Discovery Gardens, and Al Furjan Stations, and the other remaining three stations would be opened later on.’ 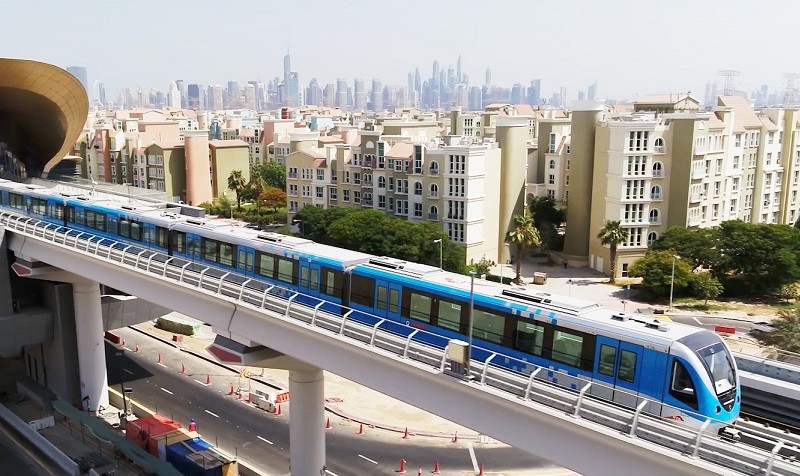 He adding on stating that RTA celebrates the New Year by starting the operation of Route 2020, which serves densely populated districts inhabited by 270k persons such as The Gardens, Discovery Gardens, Al Furjan, Jumeirah Golf Real Estates, and the Dubai Investment Park as well as the site of Dubai Expo.

He stated that these stations were selected for operation on the first of January due to several perimeters namely the density of population nearby the station, anticipated number of riders, commercial activities in the area served by the stations, and the link with other public transit means at each station.

He explained that the opening of Route 2020 for the public ‘follows the successful completion of four operational tests and trials.’ 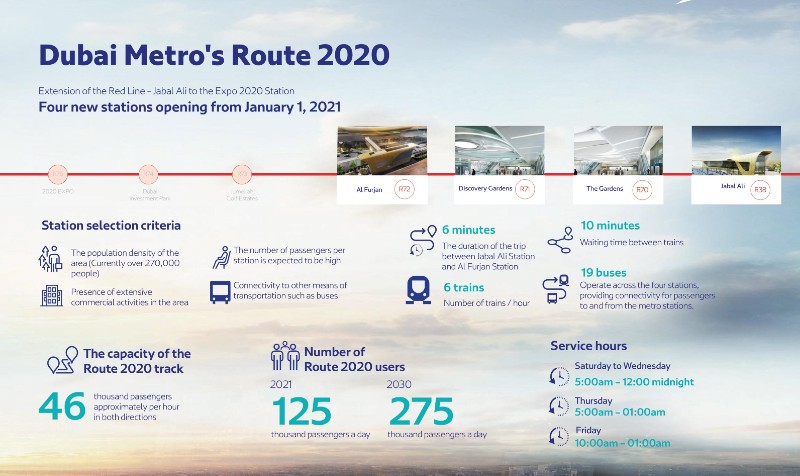 Here’s what the RTA shared about the service timings

The inaugural journey on Route 2020 for the public will start from Jabal Ali Station to Al Furjan Station and in the opposite direction.

Friday: the first journey will start at 10am and the last one will be at 1am the following day.

Saturday to Wednesday: The first journey will start at 5am and end at midnight.

ALSO READ: The announcements at the Dubai Metro platforms are about to change

The journey time between Jabal Ali and Al Furjan stations will be just six minutes.

Per hour, there will be six trains, which means one train every 10 minutes.

‘The route can serve 4,176 riders per hour per direction,’ noted Al Tayer.

According to studies done by the RTA, the Expo Station is expected to serve about 35,000 daily visitors of Expo during weekdays, and the number to increase to 47,000 daily visitors during weekends. Expo 2020 will kick off on the postponed date of October 1, 2021, and will run until March 31, 2022.

We can’t wait to hop onboard!

News
Transport
EDITOR’S PICKS
So, when is the next UAE public holiday in 2021?
READ MORE
All of the lavish new hotels set to open in Dubai in 2021
READ MORE
16 of the best pool passes in Dubai that are fully redeemable
READ MORE
All of the restaurants at West Beach, Palm Jumeirah
READ MORE
MOST POPULAR
Win a room at next weekend's Fairmont Bab Al Bahr Lock In
MOHAP begins Sinopharm trials on children aged three to 17
3 all-you-can-eat breakfast deals in Dubai to try this weekend
Update: Emirates again extends suspension of flights from India to UAE
This Abu Dhabi hotel has amazing dining deals seven days a week
YOU SHOULD CHECK OUT
Our website uses cookies and other similar technologies to improve our site and your online experience. By continuing to use our website you consent to cookies being used. Read our privacy policy here.