Buckets of fun and spades of prestige…

Yas Mall is the proud owner of a new Guinness World Record.

Not for its shops, or its sales, there’s been no world’s biggest shawarmathon attempt in the food hall or ‘most bags carried back to the car in one trip’ success. No. This record is for the World’s Largest Sand Bottle Art Structure.

The attempt, which took the form of a giant sand bottle, was part of the Aldar mall Amazing Sale! Campaign.

An event that saw big savings across a number of malls up until December 5. And if you missed out on the dramatic discounts, that’s OK, the very first Abu Dhabi Shopping Season is on the way (December 10 to February 14, 2021), and we’ve been promised wild retail scenes. 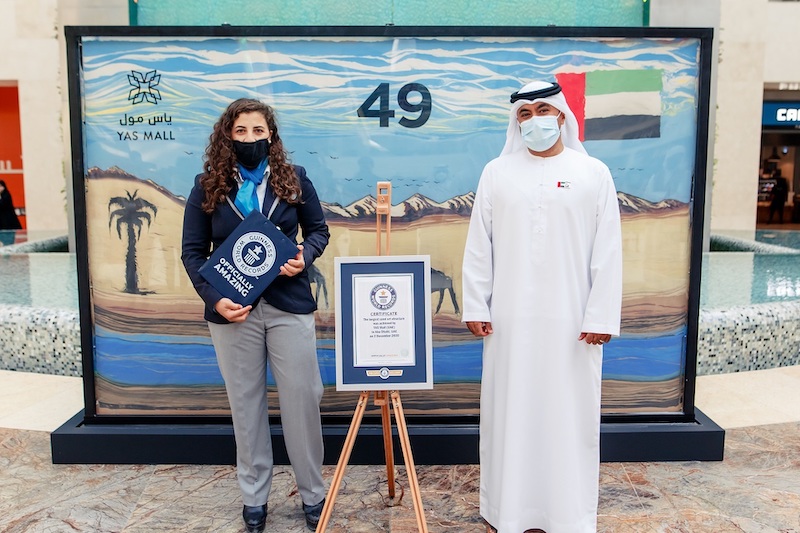 Message in a bottle

The record-breaking sand art bottle was composed by a team of ‘expat artists’ and consisted of layers of coloured sand, rendered into an evocative UAE scene, that was the perfect fit for National Day celebrations.

An official release from the PR team that represents Yas Mall, reported the mass of the structure to be 2,245.5 kg. Which is incredible. To use a regionally relevant metric — that equates to just shy of one and a half Nissan Patrols.

We know. It doesn’t look much like your conventional bottle, that’s just the name given to this particular framing of the craft.

And sand is a pretty appropriate medium for art in this region, with the futuristic network of cities here being built amongst the desert’s shifting dunes.

But if you were hoping for an up-close glimpse of the structure, we’re afraid you’ll have to make do with our pictures, as it’s all been swept away.

Going with the grain

This isn’t the first Guinness World Record handed out to a Yas Mall enterprise this year. Adventure hub Clymb picked up two big clout nuggets for its gravity-defying attractions.

If you want to check out the indoor skydiving side of Clymb, there’s never been a better time to do it. The First Time Flyer Package (which includes two flights) has been discounted to just Dhs175 until December 15. See you at the jump-off.

Art
Culture
News
EDITOR’S PICKS
UAE holiday dates announced for Eid Al Adha
READ MORE
Emirates extends suspension of flights from India to UAE again
READ MORE
Coming soon: Everything we know about Ain Dubai so far
READ MORE
Khorfakkan set to open new tourist attraction 580 metres above sea level
READ MORE
MOST POPULAR
A cool new hotel is opening in Jumeirah Village Circle in September
Resident returning to the UAE? Here's the approval form
WizzAir Abu Dhabi will start flying to Italy with fares from Dhs129
Get two-for-one on Friday brunch at this popular Dubai pub
Spend the summer at this awesome new Surf Shack pop-up
YOU SHOULD CHECK OUT
Our website uses cookies and other similar technologies to improve our site and your online experience. By continuing to use our website you consent to cookies being used. Read our privacy policy here.