In a series of videos posted to his Instagram Stories, Fazza shared clips of five gorgeous young dogs happily playing and cuddling up together. One of them in particular caught the Prince’s eye, thanks to his sweet, calm nature. 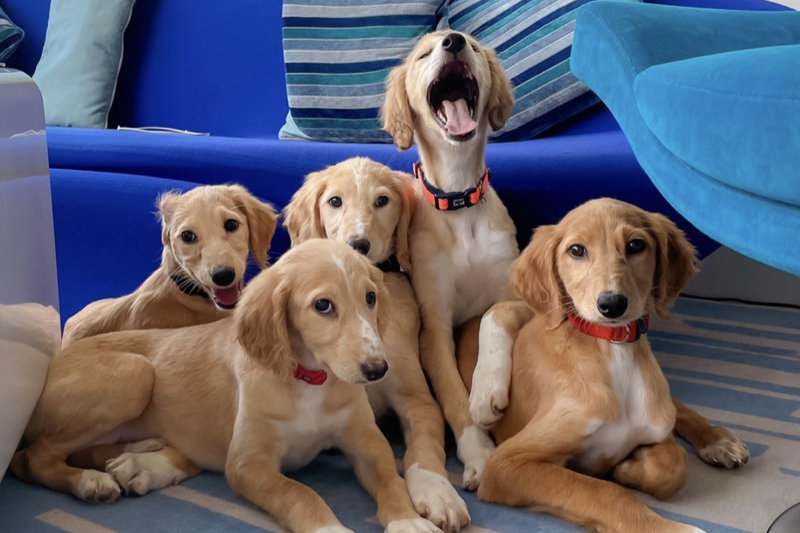 “Someone is a bit shy… hey, why are you so shy?” Faz asked him. The Crown Prince attempts to get his attention by calling the pup Mr Brown and Brownie, but after no response he says, “What should we name you?”

Meanwhile some of the other dogs are craving Sheikh Hamdan’s attention, offering plenty of love in return. It’s not yet clear how long Sheikh Hamdan has had the dogs, which look young but are not newborn puppies.

It’s not the first time we’ve seen the Sheikh welcome a new dog into the family. In 2019, he took to Instagram to introduce his new puppy called Tiny.

The not so ‘Tiny’ dog was in the arms of a boy named Mohammed, fondly known as Maj. He is the son of the Sheikh Hamdan’s long-time friend Ahmed Jaber Al Harbi and a quick look on his Instagram account shows the two friends share one common interest – their love for animals.

Sheikh Hamdan’s love for animals is certainly no secret. Whether its spending time in the desert with Arabian oryx, gazelles or falcons, or down at the stables, much of his spare time is spent with the cute creatures.

Pets
Royals
EDITOR’S PICKS
Here's the full list of UAE public holidays in 2023
READ MORE
23 incredible things to look forward to in the UAE in 2023
READ MORE
Hidden gems: 10 UAE desert pop-ups to discover this winter
READ MORE
Where to travel in 2023: 10 new flight routes from the UAE
READ MORE
MOST POPULAR
Pics of the week: Your best photos of the UAE
Dhow & Anchor has got you covered every day of the week
RTA: All the road closures you need to be aware about
Review: The Nice Guy Dubai
Masha and the Bear is coming to Abu Dhabi this April
YOU SHOULD CHECK OUT
Our website uses cookies and other similar technologies to improve our site and your online experience. By continuing to use our website you consent to cookies being used. Read our privacy policy here.