Lucky diners and sun soakers saw them in the flesh…

It’s no secret that footballing legend Cristiano Ronaldo is back in Dubai. Whilst he’s here, he’s wasted no time in catching up with our very own Crown Prince HH Sheikh Hamdan bin Mohammed bin Rashid Al Maktoum, with whom he shares a firm friendship. Today, Friday, January 28, the duo were spotted at some of Dubai’s hottest new spots.

They delighted unsuspecting diners at sky-high restaurant SushiSamba Dubai, which is found on the 51st floor of St. Regis Dubai, The Palm. There, they took a stroll around the venue – and were no doubt impressed by those spectacular views. Sheikh Hamdan and Ronaldo also visited the spectacular new 360 degree infinity pool, Aura Skypool, which can be found on the floor below SushiSamba.

Sheikh Hamdan is known for his love of Dubai’s fantastic restaurants – often being one of the first to visit some of the hottest new venues that have opened across the city.

Cristiano Ronaldo’s VIP tour came before his hotly-anticipated appearance at Expo 2020, which was expected at 3pm today at Al Wasl Plaza. Yesterday, the football superstar and his son met up with Sheikh Hamdan and His Highness Sheikh Mohammed bin Rashid Al Maktoum, Vice-President and Prime Minister of the UAE and Ruler of Dubai, in videos posted to Sheikh Hamdan’s Instagram account. 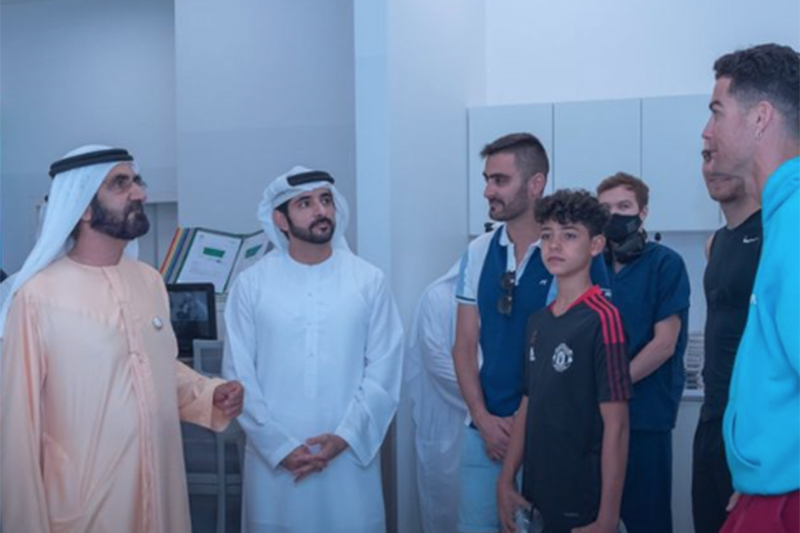 Last night, on January 27, Ronaldo and his family dined on what looked to be a private terrace at the Address Downtown, Dubai, with up close views of the Burj Khalifa. The need for this soon became clear, as Cristiano had arranged for a birthday message to his fiancé Georgina Rodríguez to be beamed across the iconic building.

Celebrities
News
Royals
EDITOR’S PICKS
Here's the full list of UAE public holidays in 2023
READ MORE
23 incredible things to look forward to in the UAE in 2023
READ MORE
Hidden gems: 10 UAE desert pop-ups to discover this winter
READ MORE
Where to travel in 2023: 10 new flight routes from the UAE
READ MORE
MOST POPULAR
Reservations are now open for French restaurant Fouquet's Dubai
The colourful Sharjah Light Festival returns next week
Relive those cosy winter moments at Chalet 105 at Twiggy
There are some big road closures in Abu Dhabi this weekend
Escape for a romantic desert getaway this Valentine's Day
YOU SHOULD CHECK OUT
Our website uses cookies and other similar technologies to improve our site and your online experience. By continuing to use our website you consent to cookies being used. Read our privacy policy here.