Spreading rumours online could land you in jail... for three years

If you’re a bit of an online gossip, you better sit up and pay attention.

Spreading false rumours through social media could do more than just hurt some people’s feelings or a business’s reputation – it could actually land you in jail.

And this is no little slap on the wrist – deliberately perpetuating lies could see you handed a prison sentence of up to three years.

The government is taking the issue so seriously because, as they say, rumours could damage an economy, threaten public security, and just generally spread terror and fear through society.

READ MORE
*Heard a rumour about something in Dubai? Here’s how to clear it up*
*The UAE is going to review its maternity leave*
*UAE government warns people against sharing plane crash pics*

Arabic language newspaper Emarat Al Youm reported that the penalty can be imposed on those who knowingly spread rumours or false data that could harm the public interest or disturb the peace.

“Those who deliberately spread such rumors or lies could face jail of one month to three years,” said Colonel Salah Al Ghoul, Director of the Law Respect Culture Bureau at the Ministry of Interior.

The ministry urged social media users to not blindly repeat gossip, and instead do a little digging before posting any allegations online.

“We call on the public not to rely on such information. In the UAE, there are official platforms which provide accurate information and they should be the sole accurate source of any news for the public,” Al Ghoul told Emarat Al Youm.

“We are in an age of massive data flow. People must stop spreading inaccurate or erroneous information so they will not be prosecuted.”

READ MORE
*Update: The legal view on VPN use in the UAE*
*New proposed rules regarding pet ownership in the UAE*
*What you need to know before leaving the UAE*

Heard a rumour? Here’s how to clear it up in one text

If you’ve heard something a bit fishy and want to know if it’s true, there’s actually a really easy way to do that.

All you need to do is send a WhatsApp message to Dubai Municipality, and they’ll check it out for you. The municipality promises to respond to the query within eight hours, either validating the rumour or confirming it’s untrue.

Got something you want cleared up? Or spotted something that seems untoward? The number to send a WhatsApp to is +971 50 107 7799.

So make the rumours page on Dubai Municipality a must-check before posting anything on Facebook or Twitter (and it actually makes pretty interesting reading anyway). 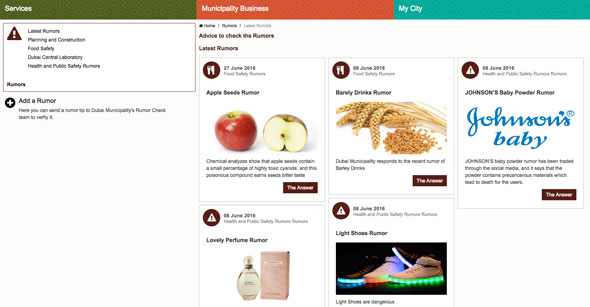 Some of the latest accusations to be refuted are that Sarah Jessica Parker’s perfume Lovely will kill you four days after spraying it (it won’t), that storing bread in the freezer makes it poisonous (it doesn’t), and that Oreo chocolate contains alcohol (it doesn’t, that was all down to a mistake in translation).