Yes, Dubai is getting its own French Riviera-inspired neighbourhood

Dubai is getting another waterfront suburb, but this one’s going to be inspired by the French riviera-inspired: construction has begun on the new community, and the first parts of it should be ready by the end of next year. It will be in Mohammed Bin Rashid Al Maktoum City, in the Meydan One project.

Yes, so it will be part of that massive development set to have a giant mall with retractable roof, the world’s largest dancing fountains and the world’s tallest residential tower.

The waterfront community, the first in a series of projects by Azizi Developments, will run along the Dubai Canal. You won’t have to wait long to see it take shape, either, as phase one and two of the project should be finished by December 2018.

*ALSO: Two HUGE new islands are being built near the Burj Al Arab*

In total, there will be 13,000 residential units of one-bedroom, two-bedroom and studio apartments, a four- and five-star hotel and a large retail district complete with leisure and entertainment options.

Here’s a glimpse of what the promenade will look like… 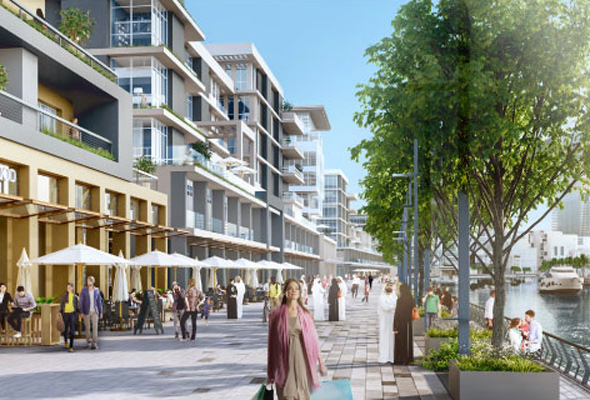 The new neighbourhood will offer access to long paved pedestrian paths and water transport. For those budding sailors, there will also be  yachting facilities and a proposed marina.

It will also provide direct access to the new Meydan One Mall as well as the Meydan Racecourse, where Dubai’s staple Dubai World Cup is held every year.

One thing’s for sure, with this and all of the development around Marasi Business Bay and Dubai Creek Harbour, Dubai Canal and Dubai Creek will be truly transformed in a few years’ time.

News
EDITOR’S PICKS
What’s On Nightlife Awards 2021: Here are the nominees...
READ MORE
It's back! What's On Lock In returns to Media One Hotel
READ MORE
Arts and culture: 5 spots we can't wait to visit at Expo 2020 Dubai
READ MORE
UAE petrol prices are set to decrease in September 2021
READ MORE
MOST POPULAR
This chic new rooftop bar is coming to Dubai Marina for a limited time
A pair of Pickl burger joints are opening in Abu Dhabi
The London Project to open huge new venue with three exciting concepts
Head to Dubai Opera in October for the timeless music of Frank Sinatra
Coming soon: The hottest new bars, restaurants and beach clubs
YOU SHOULD CHECK OUT
Our website uses cookies and other similar technologies to improve our site and your online experience. By continuing to use our website you consent to cookies being used. Read our privacy policy here.