Update: The line up for Sensation Dubai has been released

The full line up adds a further five names to the already announced Steve Angello.

One of the world’s biggest dance events, Sensation, is returning to Dubai for a fourth year at Meydan this Friday November 10.

And today the full line up has been announced, adding to already announced headline act Steve Angello, the ex Swedish House Mafia DJ.

Headline act Steve Angello began DJ-ing at 12 (yes really), and was a pioneer in Stockholm’s underground scene. The 34-year old veteran went on to enjoy worldwide success as part of Swedish House Mafia from 2008 to 2013. Their hits include Don’t You Worry Child and Save the World. His two track EP, Genesis, dropped last month, with his second solo album Almost Human, expected later this year.

You can check out what to expect here:

Sensation comes with a strict all-white dress code (and plenty of light shows) as well as a brand new theme, ‘Celebrate Life’ as it returns to Meydan.

The previous three themes of the electronic music event have been ‘source of light’, ‘ocean of white’ and ‘desert dome’.

Since its conception 18 years ago, the one-day electronic and dance festival has travelled across five continents and 35 countries welcoming more than two million visitors worldwide. 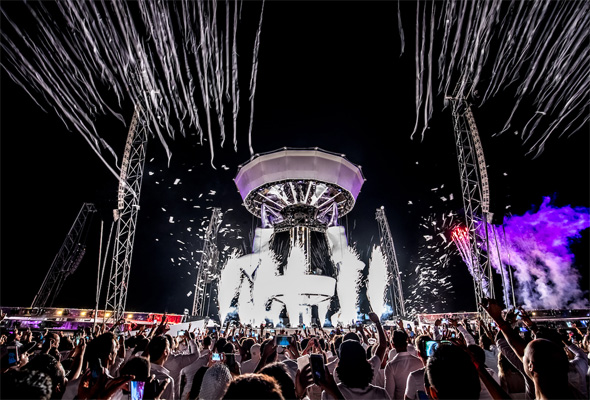 ALSO READ:
3 Dubai party brands that are taking their nights international
Liam Gallagher to headline party in the park in November

“We are happy to bring Sensation back to Meydan with a brand new show and ‘Celebrate Life’ together with thousands of like-minded party goers… We will push the boundaries of nightlife yet again to give music lovers an exhilarating and inspiring spectacle,” said Nicolas Vandenabeele, director at Envie Events.

The last three editions all sold out, and you can expect more than 14,000 people at this one-off nightlife experience.

Tickets are now on sale via PlatinumList.net from Dhs390. Strictly 21+.