WATCH: Dubai Police take to the skies aboard a futuristic flying motorbike

Dubai Police are probably the most technologically advanced police force on the planet – what with their fleet of tricked out supercars and the world’s first autonomous ‘Robocop’.

But you didn’t think they’d stop there, did you? Of course not. GITEX Technology Week is currently in full swing and the city’s coppers thought it the perfect platform to unveil a host of new futuristic tech designed to help make Dubai even safer.

First up? A flying motorbike that looks like it wouldn’t be out of place in a sci-fi film. Dubbed ‘Hoversurf’, the all-electric vehicle flies above the ground at a height of five metres, and can be used to navigate a policeman through heavy traffic in the event of an emergency situation.

With a range of up to 6 kilometres, it can hit top speeds of 70km per hour and is fully-autonomous, meaning it can be controlled remotely without a passenger onboard. You can check it out in action in the video below, it’s pretty impressive.

For something a little closer to the ground, Dubai Police also showed off a regular motorbike, and by that we mean that it has two wheels and drives on the road. Other than that this thing is way cooler than your average moto. 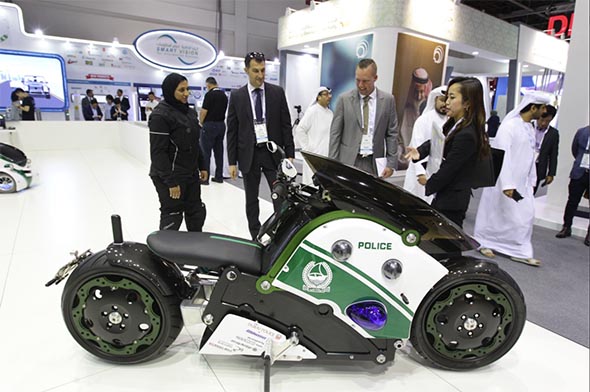 Built in conjunction with Japanese company Mikasa, it sports eight cameras for catching reckless drivers in the act, and it too is all-electric with a maximum speed of 200 km per hour.

Remember that cute mini robot patrol car we told you about back in June? That got a showing too. While we’re still not sold on whether it’s intimidating enough to scare off criminals, there’s no doubt that the tech in it is top notch. 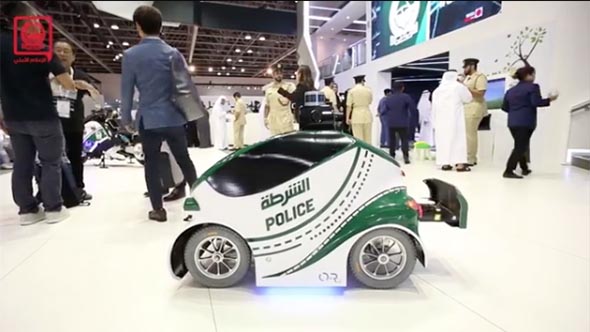 Designed to be used around Dubai’s tourist destinations, it can scan crowds for known suspects and even deploy a drone to help it scope out more difficult to reach areas.

You can check out the full range on show at GITEX from Dubai Police in the video below. The city feels safer already.