Watch: Sheikh Mohammed witnesses completion of Museum of the Future

It looks so futuristic…

The Museum of the Future – one of Dubai’s most ambitious and exciting upcoming projects just reached a milestone and is one step closer to opening.

On Saturday September 3, the last piece of the Museum of the Future was signed by HH Sheikh Mohammed bin Rashid Al Maktoum, Vice President and Prime Minister of the UAE and Ruler of Dubai, before being placed on the structure to complete the eye-catching facade.

The Ruler of Dubai sent out a series of tweets of the momentous occasion along with a video and some beautiful photos showing the stunning Arabic calligraphy on the structure illuminated as dignitaries and officials watched on.

In one of the tweets, Sheikh Mohammed stated that the Museum of the Future is ‘the most innovative building in the world’ and ‘a global engineering icon.’

The museum will explore the future trends and opportunities in science, technology and innovation. By making Dubai a testbed for emerging technologies, our aim is not merely to build another architectural marvel, but to build the foundation of tomorrow. pic.twitter.com/SHju2b1kow

The tweets continued stating, ‘The museum will explore the future trends and opportunities in science, technology and innovation. By making Dubai a testbed for emerging technologies, our aim is not merely to build another architectural marvel, but to build the foundation of tomorrow.’

Posting a photo of Sheikh Mohammed in front of the structure, the Crown Prince stated ‘Dubai is the world’s city of the future. A city with a leader who never settles for less than 1st place,’

Here’s what we know so far about one of the most iconic structures in the world. 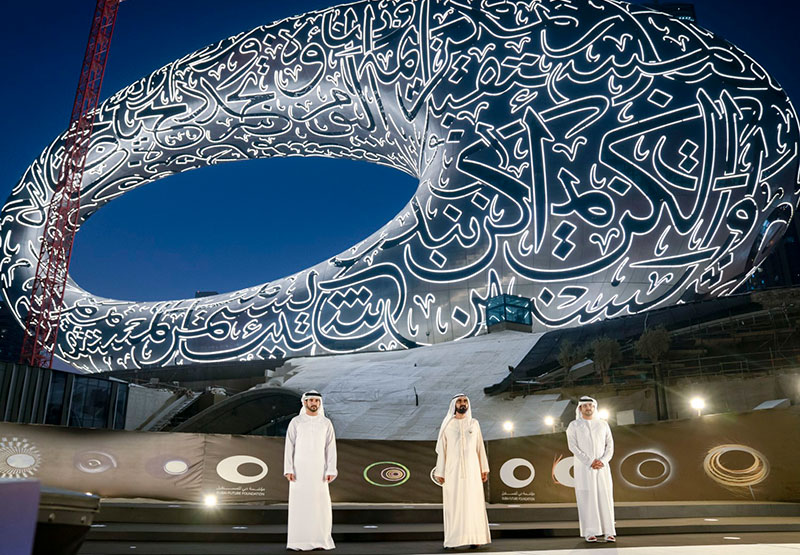 The Museum of the Future is a unique design shaped like an eye with a hollowed-out middle and covers an area of 30,000 square metres and is 7-stories standing at 77m high.

It took 1,024 panels to make up its facade which was manufactured by robots and contain Arabic calligraphy – which are quotes about the future from Sheikh Mohammed.

They read ‘We may not live for hundreds of years, but the products of our creativity can leave a legacy long after we are gone.’ and ‘The future belongs to those who can imagine it, design it, and execute it… The future does not wait. The future can be designed and built today.’

The Museum of the Future will explore the future of science, technology and innovation and Sheikh Mohammed had previously said that it will be ‘an incubator for ideas, a driver for innovation, and a destination for inventors and entrepreneurs from around the world’

The Museum of the Future is located in front of  Emirates Towers, but will also link to Financial Center and the Trade Center. According to Sheikh Mohammed, they will form the most innovative, creative and influential region in the region.

Now that the outer shell is complete, focus on working on its interiors can begin. We don’t have an official opening date declared just yet but we will let you know as soon as we know.

We can’t wait for this spectacular museum to open!

Culture
News
Royals
EDITOR’S PICKS
Ain Dubai will open with fireworks, live music and a drone show
READ MORE
Incredible Aura SkyPool to open in Palm Tower this November
READ MORE
Brit Grand Slam hero Emma Raducanu confirmed for Mubadala Tennis
READ MORE
What’s On Nightlife Awards 2021: Here are the nominees...
READ MORE
MOST POPULAR
Celebrate creativity at City Walk during this three-weekend event
This Heinz Beck brunch at Waldorf Astoria just got an upgrade
10 brilliant things to do in Abu Dhabi this long weekend: Oct 21 to 23
Experience Arabesque elegance at Asil's Saturday lunch
If there's one place to be this Halloween, it's Warehouse
YOU SHOULD CHECK OUT
Our website uses cookies and other similar technologies to improve our site and your online experience. By continuing to use our website you consent to cookies being used. Read our privacy policy here.