Once completed, the project will provide visitors with a deeper understanding of Emirati history and culture…

If you love visiting Al Fahidi Fort – an iconic spot in Old Dubai, be prepared as it’s about to become to undergo some changes to make your experience even better. 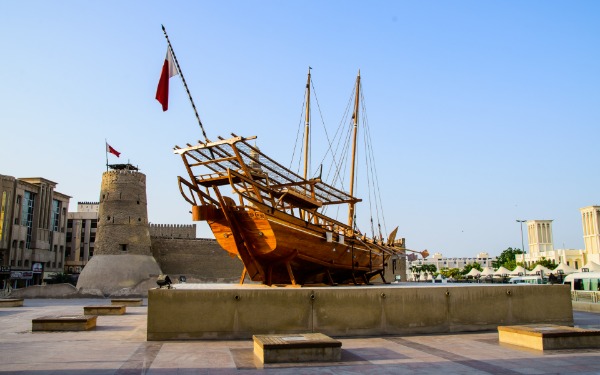 The project is being carried out as part of the vision of the late Sheikh Rashid bin Saeed Al Maktoum to promote the fort as a cultural landmark and preserve the emirate’s civilisational and cultural heritage.

It is also in line with the directives of HH Sheikh Mohammed bin Rashid Al Maktoum, Vice President and Prime Minister of the UAE and Ruler of Dubai to preserve historical buildings in the city.

Here’s what you need to know about Al Fahidi Fort.

Located at the southern end of the Dubai Creek, the Al Fahidi Fort was built in 1787 and served as the headquarters for the ruler of the emirate.

It was restored during the reign of the late Sheikh Rashid bin Saeed Al Maktoum and then in 1971, the year when the UAE was founded, Al Fahidi Fort was officially inaugurated as the Dubai Museum and began showcasing the history and heritage of the emirate of Dubai.

Since then, the development and expansion of the Fort continued, and in 1995, the second section of the museum located under the fort was opened, which contains exhibits and collections from the period before the discovery of oil as well as antiquities that were found in Dubai’s archaeological sites.

Speaking about the project, the Crown Prince stated that Al Fahidi Fort has a special significance in Dubai’s history as it has witnessed key phases of Dubai’s transformation over the past 200 years.

He stated, ‘Our historical assets are our treasures, and we must continue to protect and preserve them for future generations.’

H.H. Sheikha Latifa bint Mohammed bin Rashid Al Maktoum, Chairperson of Dubai Culture said the historical landmark holds a prominent place on the cultural tourism map, both locally and internationally, serving as a destination for visitors and tourists from abroad.

She stated that the project upon completion will provide visitors with a deeper understanding of Emirati history and culture.

As part of the rehabilitation plan, Dubai Culture has announced that Al Fahidi Fort will be temporarily closed due to the renovation work.

Culture
Royals
EDITOR’S PICKS
So, when is the next UAE public holiday in 2021?
READ MORE
All of the lavish new hotels set to open in Dubai in 2021
READ MORE
16 of the best pool passes in Dubai that are fully redeemable
READ MORE
All of the restaurants at West Beach, Palm Jumeirah
READ MORE
MOST POPULAR
Celebrate Christmas early with these 'Halfway to Christmas' brunches
Pics of the week: Your best photos of the UAE
What’s On The Bookshelf: Rom-coms great for reading on the beach
Book your holiday package from Dhs1,399 per person with Holidays by flydubai
Immersive cabaret concept The Theater Dubai opens its doors
YOU SHOULD CHECK OUT
Our website uses cookies and other similar technologies to improve our site and your online experience. By continuing to use our website you consent to cookies being used. Read our privacy policy here.