In the 1997 movie, Anaconda, Jenifer Lopez and a crew of documentary makers head to the Amazon river in search of a legendary 12 metre long monster snake. They find it of course, amid a flurry of CGI jump scares and B-movie style dialogue. It’s one of those ‘good bad’ classics.

But The National Aquarium’s latest arrival, a reticulated python known simply as ‘super snake’, is no work of fiction. The XXL reptile is a 14 year old female, slides in at a huge seven metres in length, weighs 115kg, eats ducks and rabbits, and is a bit of a Michael Phelps in the pool.

The National Aquarium is located at Abu Dhabi’s upcoming leisure and entertainment mega project, Al Qana and is reported to be over 90 per cent complete. 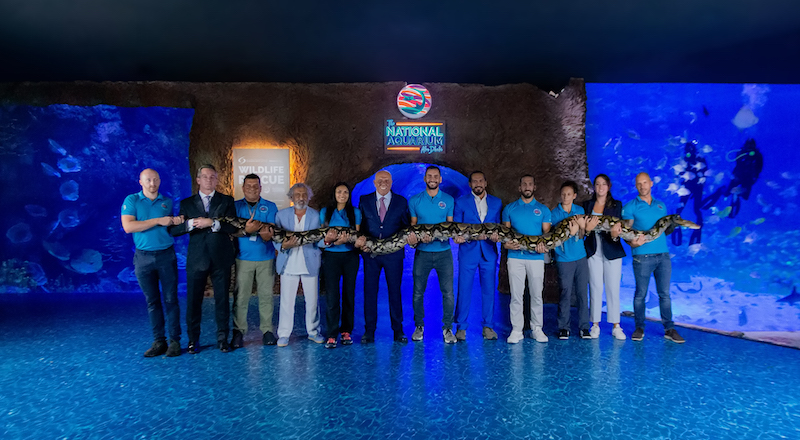 This Super Snake is believed to be the largest snake in captivity, and although was born as part of a conservation programme in LA, in the wild — her species is native to South and Southeast Asia. She’s not venomous, but she is able to nonchalantly ‘cuddle” her prey to death. These sorts of pythons have flexible jaw ligaments, allowing them to consume food much larger than their own face. A trick we once replicated with Taqado’s 1kg ‘beast’ burrito.

Speaking about the new arrival, Paul Hamilton, General Manager at The National Aquarium said “We are certain Super Snake is going to become one the biggest attractions at The National Aquarium Abu Dhabi. Just watching her relax in her lush, tropical inspired habitat is mesmerizing. The sheer size and beauty of Super Snake is going to make her the strongest representative of our Flooded Forest collection.”

When will The National Aquarium open?

Still no official, confirmed date — but with construction so close to completion, don’t rule out a 2021 opening.

Culture
News
EDITOR’S PICKS
What’s On Nightlife Awards 2021: Here are the nominees...
READ MORE
It's back! What's On Lock In returns to Media One Hotel
READ MORE
Arts and culture: 5 spots we can't wait to visit at Expo 2020 Dubai
READ MORE
UAE petrol prices are set to decrease in September 2021
READ MORE
MOST POPULAR
Abu Dhabi: Wristband no longer required for most home quarantine
As of September 19, PCR test not required to enter Abu Dhabi from UAE
This new family-friendly brunch includes free cinema tickets
Pics of the week: Your best photos of the UAE
How to use Playkey.me, the region's first supercharged cloud gaming service
YOU SHOULD CHECK OUT
Our website uses cookies and other similar technologies to improve our site and your online experience. By continuing to use our website you consent to cookies being used. Read our privacy policy here.