There truly are some mega happenings in the pipeline…

The speed at which cities within the UAE grow and evolve never fails to impress us. The level of engineering innovation, creativity and imagination that goes into the individual projects that tell the story of this development is nothing short of historic. 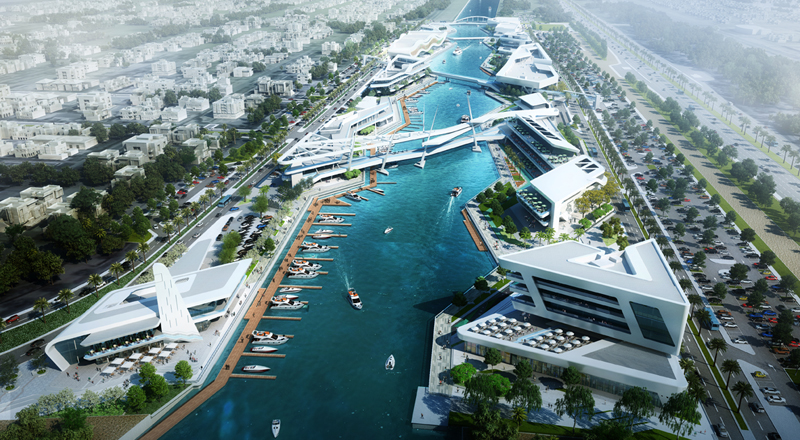 Al Qana is a massive waterfront entertainment and leisure hub located in the Rabdan end of Abu Dhabi. It’s still under construction, but anybody that’s recently driven by it will be able to tell, it’s tantalisingly close to being ready for opening (about 90 per cent overall). The sleek white arches, that rise and descend over the development like a post-modern wave give the area an appropriately nautical feel. And with the marina, and its 100 berths now complete, it’s an appropriately nautical facade. When it opens late this year, visitors to Al Qana will also be able to knock cutlery in a tasty range of restaurants, cafes and diners. There’s a huge 15-screen Cinemacity (that’s 85 per cent complete), an Esports and gaming hub called ‘Pixel’, The Bridge Wellness and Lifestyle Hub which is now 85 per cent complete and whole load more, including… 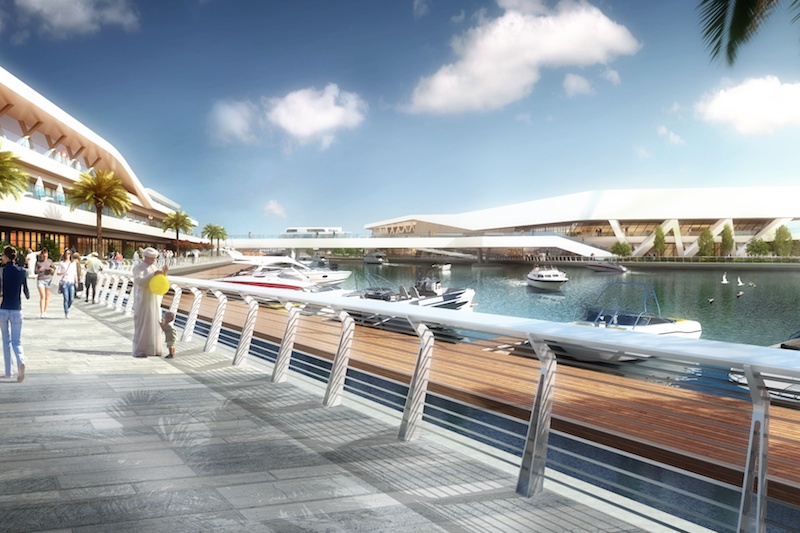 Part of the aforementioned Al Qana project in Rabdan, The National Aquarium (now 95 per cent complete) will be the region’s largest aquarium, featuring 10 experiential zones, set over 9,000 square metres. In July of 2020 the team at The National Aquarium (TNA) signed a five-year contract to work alongside the Environment Agency – Abu Dhabi (EAD) on a ground-breaking animal rescue, rehabilitation and release collaboration. Where  In addition to showing off local marine life, there will be plenty of exotic creatures too, some friendly (which you’ll be able to swim with), others — very much less so. In all there will be around 300 species of fish, birds, amphibians, arachnids and reptiles (or about 46,000 individual creatures), live underwater shows and a huge walk-through underwater tunnel. 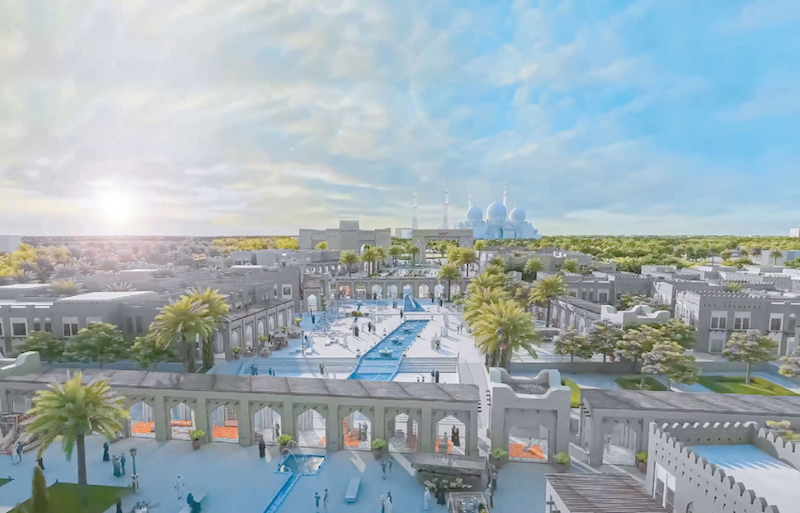 Abu Dhabi-based developers Al Qudra have unveiled plans to transform a 245,000 sqm stretch of Abu Dhabi’s W64 Zone overlooking the Sheikh Zayed Grand Mosque, next door to the upcoming Al Qana project on the Khor Al Maqtaa, into a sophisticated blanched-wall leisure and entertainment complex. And looking at these Traditional Souk renders, the scale and quality of concept are giving us legitimate cause for awe. From the patchwork-shaded alleyways of the UAE heritage-style marketplace to the leafy open courtyards, waterfront hotel and vibrant new restaurant district — it’s a project that’s somehow both in synergy with the neighbourhood it joins, and yet something truly different. 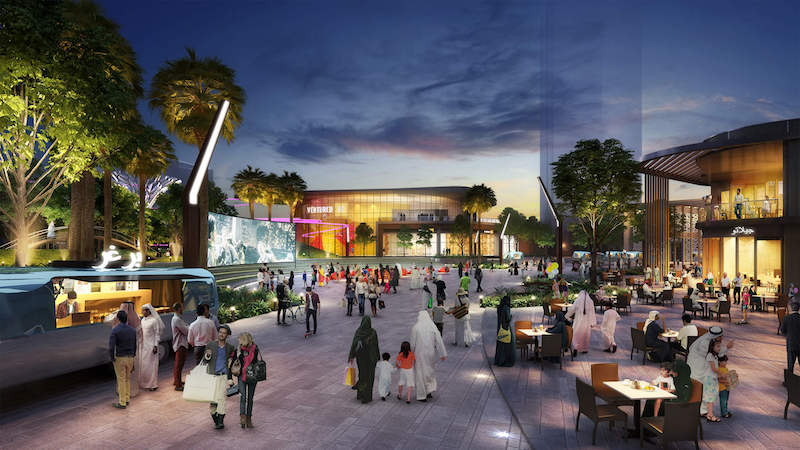 The park formally known as ‘Khalidiyah Ladies Park’ has been undergoing a radical transformation under the direction of master capital developers Imkan. Located in the beating heart of the city, what will now be known as ‘Sheikha Fatima Park’, covers an area of 46,000 sqm and along with the ever-welcome expanse of urban green will include a range of awesome sporting activities, retail sites, event space, thrilling dining experiences and more. And according to a video released by Abu Dhabi Department of Municipalities & Transport, work on the new park is now complete (though it currently remains closed to the public). The official website for the park teases the types of things that will be on offer at the site when it does open, and when comparing it to the renders — it’s likely to feature a diverse park-folio of fun. Activities and facilities mentioned include skateboard half-pipes; music stages; wholesome f&b options; ‘cutting edge retail concepts’; and coworking spaces. 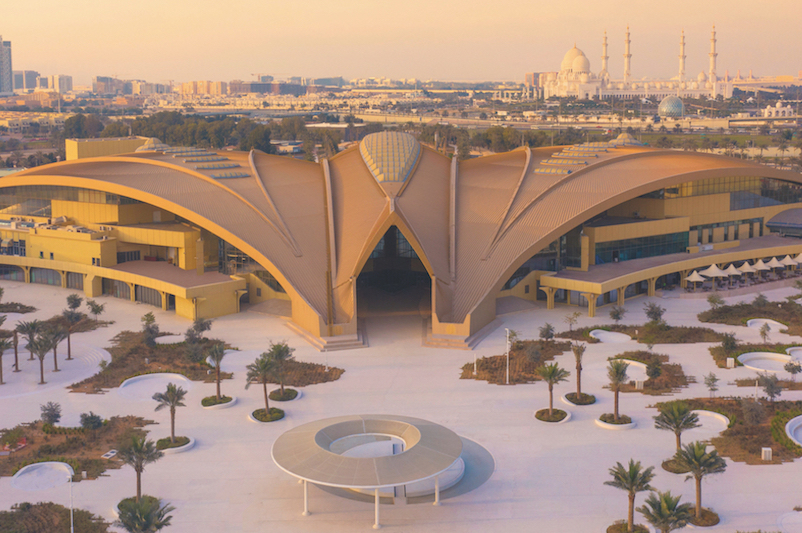 First constructed in 1983 for the UAE military, The Armed Forces Officers Club in Abu Dhabi was always a building of distinctive character. In 1997, it opened to the public as the Armed Forces Officers Club and Hotel. Announced at this year’s Arabian Travel Market — the refit, refurb, full refresh and comprehensive razzle-dazzling is due to be completed by 2022, where it will be relaunched as Erth. Which in addition to offering a cool syntactic nod to the planet we live on, also means ‘legacy’ in Arabic, and that just gives us all the feels. Guests will be able to luxuriate in the cool of the resort’s chic pool; build sand palaces on the Blue-Flag certified private beach; or wander through the botanical maze of the lush Al Fayy Garden. You could also hit the indoor and alfresco recreational hubs, offering access to a fully equipped modern gym; six separate dining experiences; dedicated event and meeting spaces; and a brand new ballroom. At re-launch, we can expect a key inventory of 237 rooms, 42 suites and excitingly super luxe-looking 13 villas. 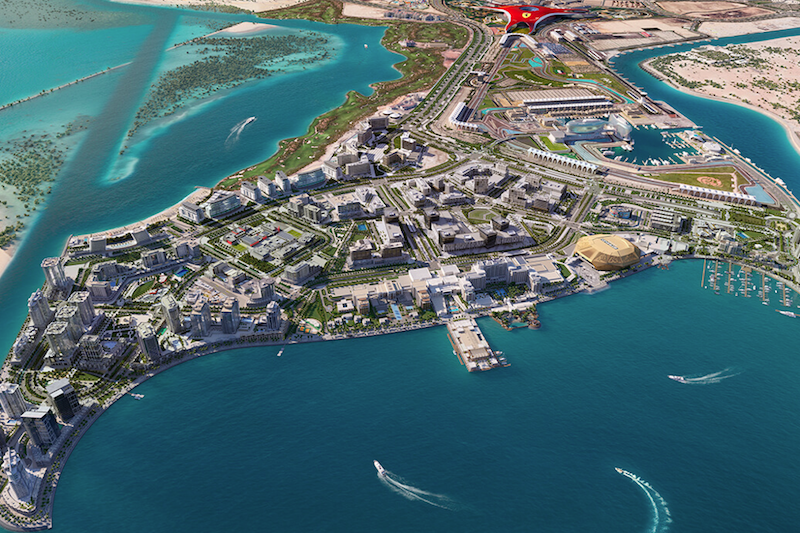 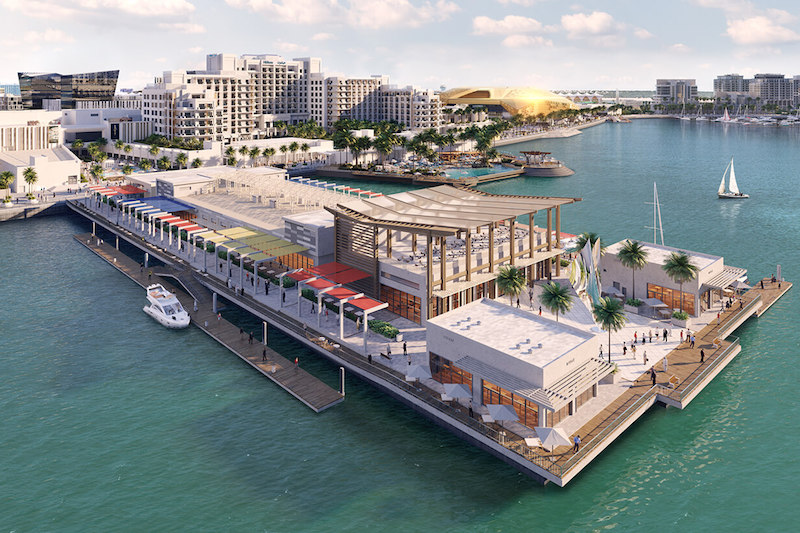 The Waterfront makes up the leisure hub of Yas Bay. Once finished, visitors will find 3km of pristine, island-edge boardwalk to meander along; 19 entertainment and retail outlets including a boutique cinema and beach club; 37 bars, restaurants, bistros and cafes; and reaching out in the azul waters of the Gulf, Pier 71. The pier area will contain 12 of its own food and beverage destinations and will be accessible by car, foot, bike, boat and water taxi.

The list of confirmed restaurants and bars at the Waterfront includes exciting anchor-names that are, we’re not quite sure how to put this but, ‘kind of a big deal in Dubai’. AsiaAsia (which will be based on the pier); Lock, Stock & Barrel (which will be located opposite next to Etihad Arena); Siddharta Lounge; hip-hop Mexican street food stop — La Carnita; and more are all heading to the capital. Check out our guide to the confirmed names at Yas Bay for more info. 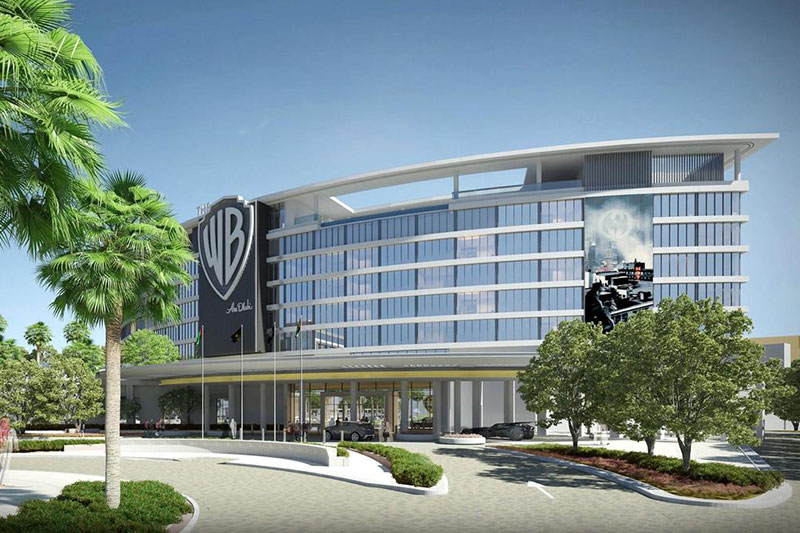 If being home to a 1.65 million square feet Warner Bros theme park wasn’t fun and exciting enough, the capital will be opening the world’s first Warner Bros. themed hotel in 2021. At the moment, construction on the hotel is over 75 per cent and as construction nears completion, real estate developer Miral have announced that the hotel will be operated by Hilton under the Curio Collection by Hilton brand.

The hotel will boast over  250 rooms which will be themed on your favourite characters from Bugs Bunny to Daffy Duck, Tweety Bird, Sylvester the Cat and much more. The rooms will be spread over eight levels and will feature modern décor that celebrates Warner Bros.’ extensive film, television programmes and comics. There will also be signature Warner Bros. restaurants, a premier spa, fitness club and a shaded rooftop pool where guests can soak in the Yas Island distinctive skyline. 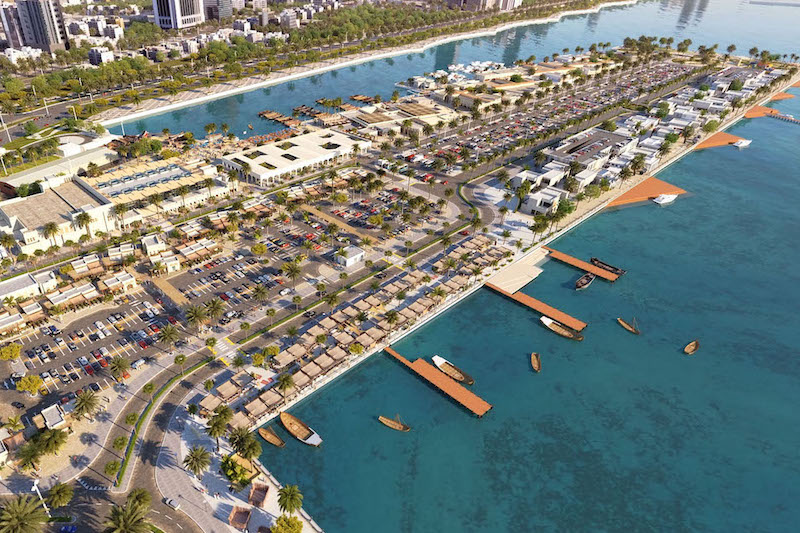 Mina Zayed, named after the UAE’s founding father, is a 40-year-old port-side community that was instrumental in Abu Dhabi’s meteoric growth as a trading hub. The three million square metre glow-up project aims to create a blended housing, tourism and entertainment destination, in addition to building on the reputation of the area as a colourful commerce hub. When the project is completed, visitors will be able to enjoy enhanced shopping experiences, such as a brand new fish market, seasonal market and redeveloped plant souq. The redevelopment includes the involvement of both Modon Properties and Aldar Properties, which means the concept and execution of the new set-up is in the very best hands. 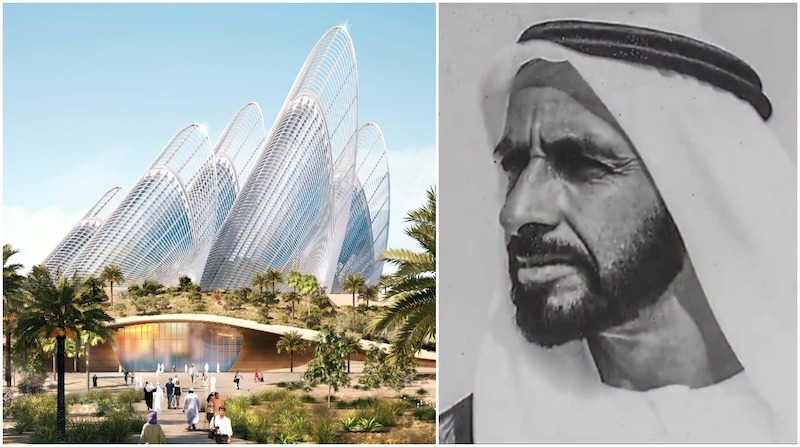 Once completed, the Zayed National Museum will stand as an architectural marvel, a fitting home for the inspiring story of our great nation and its visionary founder. Located on Saadiyat Island, already the seat of so much cultural import, the breathtaking structure designed by Foster + Partners will include a 123 metre high tower. The main gallery will be devoted to a collection of artifacts illuminating aspects of Sheikh Zayed bin Sultan Al Nahyan — the man, and his leadership journey the country’s unification, and beyond. There will also be gallery space devoted to exhibitions on Falconry and Conservation; Land and Water; History and Society; Science and Learning; Faith and Islam; and it will host the grand Sheikh Zayed Library. Although we don’t have a projected completion date, work on the building began back in 2019. 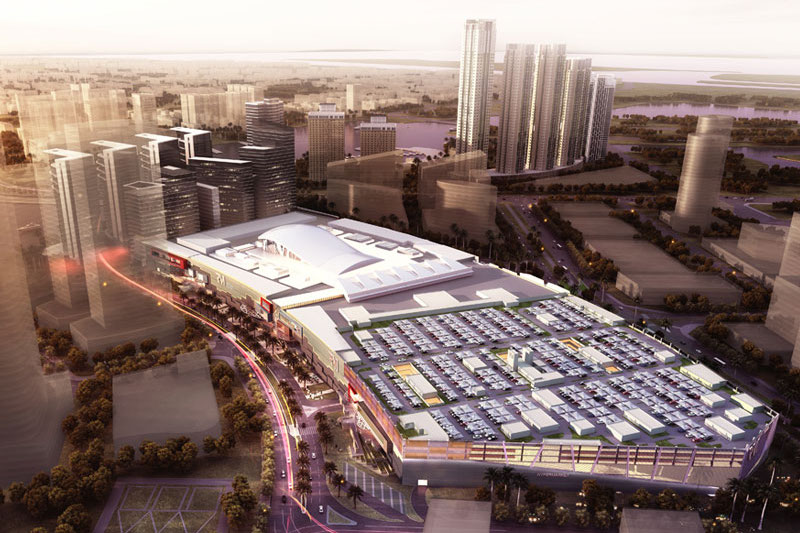 Reem Mall has described itself as ‘The World’s First Omnichannel Mall’. The details of what that actually means get complicated quickly, but from what we understand, the mall will offer a ‘blended retail’ approach, which allows for digital shopping (through an app/website) at the same time as conventional ‘bricks and mortar’ mall shopping. Data from your shopping habits can be used to make sure you get invited to redeem tailored promotions. Milat Sayra Berirmen, Digital Innovation Director for Reem Mall is on record as saying “At Reem Mall, we are leading this transformation by creating a totally new retail concept – the world’s first fully digitally enabled mall, supported by an integrated logistics hub.” 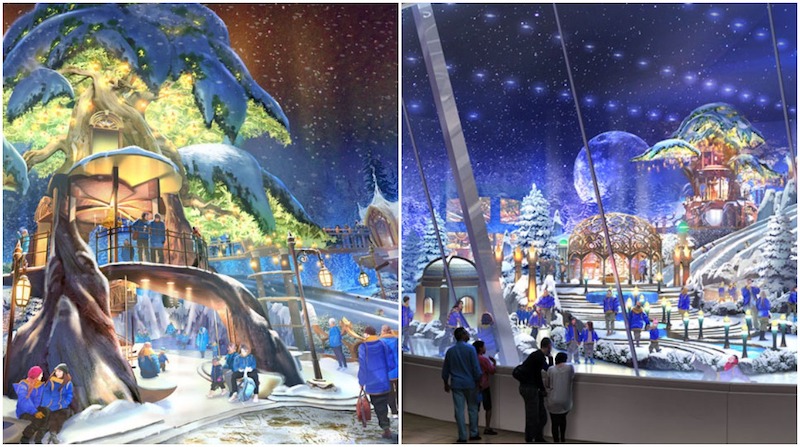 13 new restaurants we know are coming to Yas Bay

The enchanted-forest themed Snow Abu Dhabi was previously scheduled for completion in the last part of this year, and it’s being trailed as ‘the region’s largest snow park’. Construction is well underway at its location inside the USD1.2billon Reem Mall project, on Reem Island. The attraction will span across a huge 100,000 sq ft area, divided into distinct whimsical zones. We can look forward to themed-characters and 13 thrilling rides and attractions, including an enchanted tree, a snowflake garden, crystal carousel, ice labyrinth, tobogganing and a shovel-ton more. It doesn’t matter if the weather outside is frightful. The park will be kept at a rosy-nosed -2ºC, with a 500mm covering of snow (more than enough for beefy snowball building) offering a year-round chill spot in this, our beloved land of the eternal sun. 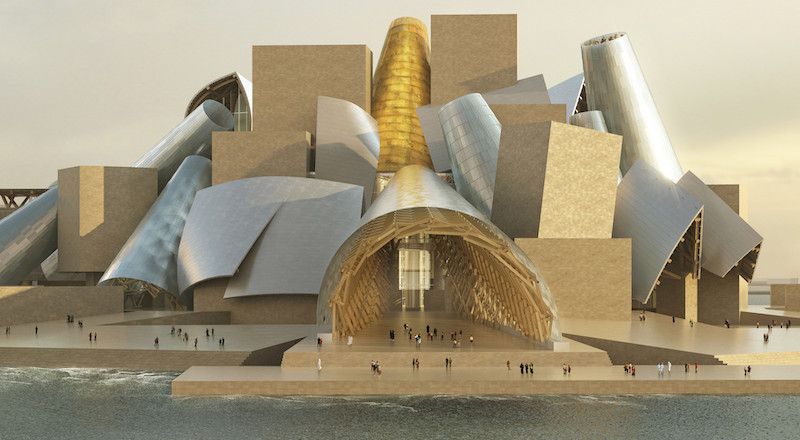 Once finished, the Frank Gehry designed Guggenheim Museum will add a jagged smear of wow to the Saadiyat Cultural District skyline. True to the spirit of Guggenheim, the plans for the building — cut a contemporary, unconventional, but singularly beautiful design. One that contains nods to its host nation, like the funnel-shaped protrusions that occupy sections of the exterior, that were inspired by the region’s historical wind towers. As outside, so within. Guggenheim Abu Dhabi will exhibit a collection of modern and contemporary art, from some of the most important creatives of the 20th and 21st centuries. Galleries will surround the central atrium on four levels, connected by glass bridges providing over 13,000 square metres of exhibition space. Currently, there is no speculative date for the completion of the project, in fact, we were unable to confirm whether or not construction has resumed, but the build timeline has been quoted in the past as a four-year job. 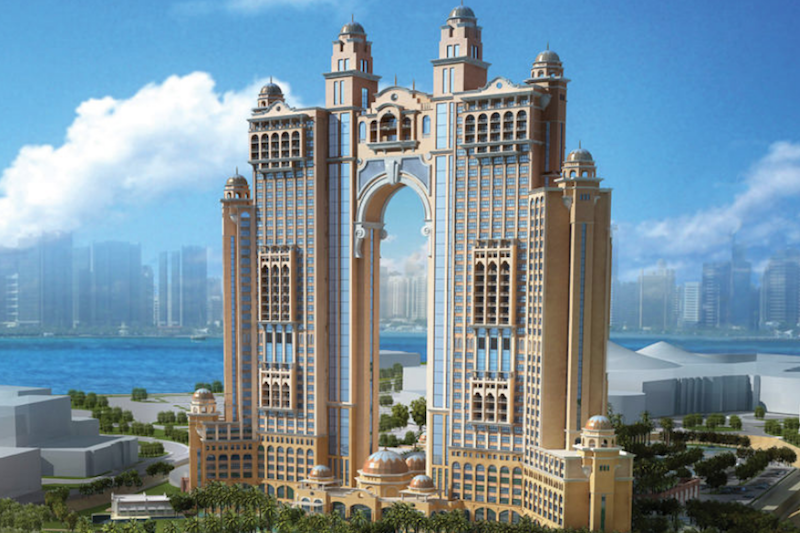 News
Things to do
EDITOR’S PICKS
What’s On Nightlife Awards 2021: Here are the nominees...
READ MORE
It's back! What's On Lock In returns to Media One Hotel
READ MORE
Arts and culture: 5 spots we can't wait to visit at Expo 2020 Dubai
READ MORE
UAE petrol prices are set to decrease in September 2021
READ MORE
MOST POPULAR
Movie review: How good is new sci-fi epic, Dune?
Pics of the week: Your best photos of the UAE
A stylish new Southern-European Neo Bistro is opening in Dubai
Staycation at this stunning hotel which is now dog-friendly
Get an Expo 2020 Dubai monthly pass for Dhs95 valid for the whole of October
YOU SHOULD CHECK OUT
Our website uses cookies and other similar technologies to improve our site and your online experience. By continuing to use our website you consent to cookies being used. Read our privacy policy here.