It’s not just your phone that needs an update every so often. There comes a time in every bricks-and-mortar store’s life where they could also benefit from a few bug fixes here and there. And so nobody was particularly surprised to learn that Apple, one of the most aggressively innovative brands on the face of the planet, wanted to give their Yas Mall shop location a little box-fresh makeover despite it only having opened in 2015.

The news is that the overhaul is almost done, and the sparkly new Apple Store 2.0 Pro Max (not the official name), will be peeling off its plastic covering on Thursday, February 3, 2022.

You’ll find it next to The Cheesecake Factory on the first floor between Town Square and Pearl Court. 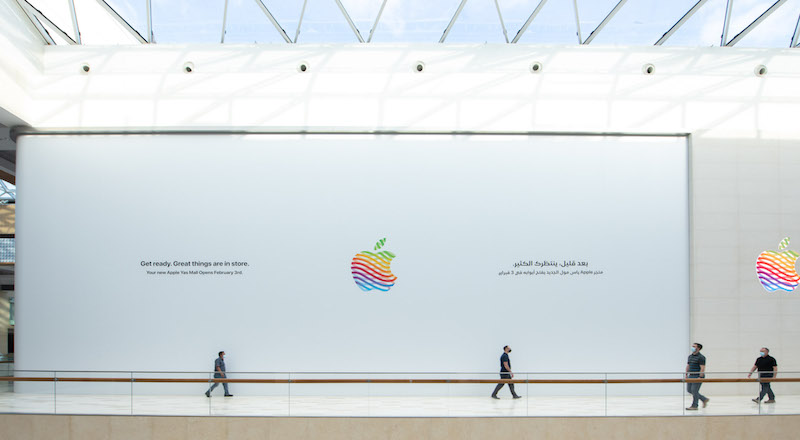 In addition to all the latest Apple phones, computers, laptops, gadgets, gizmos, accessories and other covetous contraptions — Apple Stores are known for their Genius Bar. It’s a fancy name for what is basically tech support, but if you’ve ever had any experiences with the ladies and gentlemen that work there, you’ll fully appreciate just how apt that name actually is.

Yas Mall has been undergoing something of a dramatic upgrade itself. Capital developers Aldar Investment is pumping in a half-billion dirham investment that will transform 40 per cent of the existing leasable space, into a “future proof” retail and dining offering.

The Time Square revamp is available to peruse now, and features fresh concepts such as Forever Rose cafe.

Eat & Drink
News
EDITOR’S PICKS
Here's the full list of UAE public holidays in 2023
READ MORE
23 incredible things to look forward to in the UAE in 2023
READ MORE
Hidden gems: 10 UAE desert pop-ups to discover this winter
READ MORE
Where to travel in 2023: 10 new flight routes from the UAE
READ MORE
MOST POPULAR
With its unique decor, Dubai's La Nina restaurant evokes tales of distant travels
Reservations are now open for French restaurant Fouquet's Dubai
The colourful Sharjah Light Festival returns next week
Relive those cosy winter moments at Chalet 105 at Twiggy
There are some big road closures in Abu Dhabi this weekend
YOU SHOULD CHECK OUT
Our website uses cookies and other similar technologies to improve our site and your online experience. By continuing to use our website you consent to cookies being used. Read our privacy policy here.