Holy moly, this is the newest hotel coming to JBR

A five-star hotel with a doughnut-style hole in the middle? Sounds good to us…

Dubai’s a city that likes to bend the boundaries when it comes to architecture – and its latest development is definitely doing that.

The images for a just-announced Address hotel have been released, and we’re marvelling over the futuristic twin-tower structure.

Set to be located in Jumeirah Beach Residences, the doughnut-inspired building will feature 182 hotels rooms, serviced residences and residential apartments. 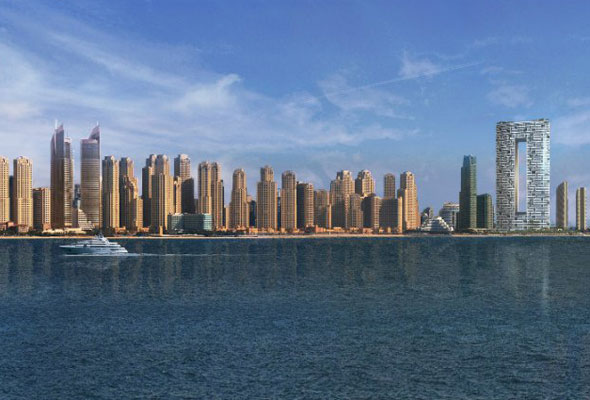 READ MORE
*Paris Hilton is planning to open her own hotel in Dubai*
*This luxury Dubai hotel allows pets*
*Dubai is getting a Dhs100m ‘cave of miracles’…*
*Can you buy apartments in Dubai for Dhs280,000? Apparently so*

It’ll be the first beachfront hotel for the resort chain, but developer Emaar hasn’t yet revealed when it will open.

What we do know, however, is that it’ll be made up of two 290-metre towers, which will be adjoined at the lobby and top-tier levels. The overall look is like a shimmering, squashed bagel (a sentence we never thought we’d write, but one we mean as a true compliment).

One of the 74-storey towers will house the hotel, and the other will be properties for residents, the latter of which will go on sale in the near future.

Sitting at the southern end of the JBR strip, guests and residents will get direct access to Sheikh Zayed Road, and views of the upcoming Ain Dubai ferris wheel (you know, the one that used to be called Dubai Eye). 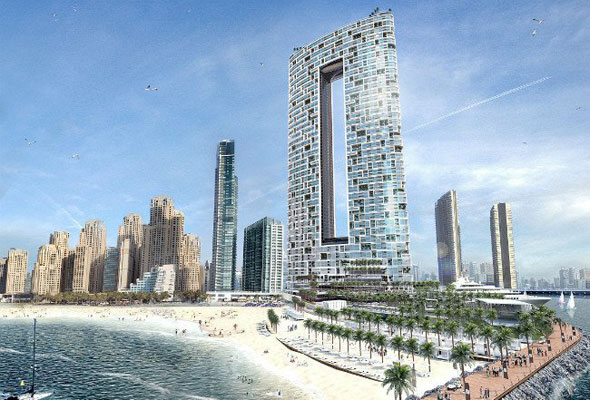 READ MORE
*The Address Downtown Dubai will not reopen this year*
*One man lost Dhs1.3 million worth of art in The Address fire*

There’ll be some separate facilities for guests and residents, including pools, and some shared – such as five on-site eateries.

Want more? You got it – how about a rooftop infinity pool, 24-hour gym, 100 metres of beach frontage, and a top-floor lounge – plus ballrooms and boardrooms?

The JBR location also isn’t the only Address branch opening in the city – a Downtown hotel is set to be unveiled at the end of this year.

It’ll be the first Address hotel to open in Dubai in six years, and looks set to open around the one-year anniversary of the New Year’s Eve fire that destroyed the Address Downtown Hotel.

Address Boulevard will be housed on the lower levels of a new, 72-storey tower linked to The Dubai Mall, and will comprise 196 hotel rooms, including 36 suites and a club lounge, with serviced residences, a massive spa, and restaurants also on-site.

Culture
Staycations
Travel
EDITOR’S PICKS
What’s On Nightlife Awards 2021: Here are the nominees...
READ MORE
It's back! What's On Lock In returns to Media One Hotel
READ MORE
Arts and culture: 5 spots we can't wait to visit at Expo 2020 Dubai
READ MORE
UAE petrol prices are set to decrease in September 2021
READ MORE
MOST POPULAR
Ellie Goulding and Andrea Bocelli to perform at Expo 2020 Opening Ceremony
7 huge movies coming to the UAE box office in the next two months
All the best ladies' day deals in Dubai you should know about
Here's why art lovers and foodies should visit Alserkal Lates this week
Oktoberfest at Atlantis The Palm includes a themed brunch at Saffron
YOU SHOULD CHECK OUT
Our website uses cookies and other similar technologies to improve our site and your online experience. By continuing to use our website you consent to cookies being used. Read our privacy policy here.