This meaty marvel comes from the team behind Sausage Fabrique…

Snag fans will be no strangers to the gourmet offerings from Sausage Fabrique, who’ve been slinging their handcrafted sausages at pop-ups and markets across Dubai since 2018. They’ve now found a permanent home in JLT, launching a chic butchery-deli with onsite dining called the Fabrique.

The Fabrique is tucked away on the lakeside level of HDS Tower, in Cluster F, with rattan chairs outdoors and a handful of tables inside. When you walk through the door, you’re greeted by a deli counter filled with the Fabrique’s homemade charcuterie, fresh sausages, imported cheeses and housemade pickles. 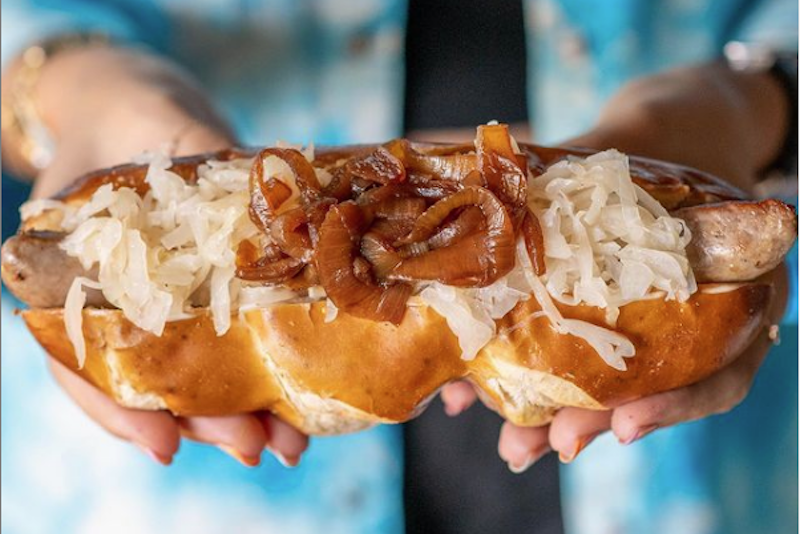 While sausages may have a reputation for mystery meat, here it’s all about transparency. The artisanal butchery is fronted by a glass window, so you can see everything being made from scratch.

If you fancy playing butcher yourself, next month the Fabrique will be launching a new hands-on masterclass for Valentine’s Day, inviting couples to come in and make their own sausages and burgers.

But right now, we’re here for the sausages… We scan the menu, which reads like a United Nations of hot dogs, from German bratwurst with sauerkraut, mustard and caramelised onions, to South African boerewors, Texas chilli dogs, and the spicy Italian crammed with peppers, parmesan and pesto mayonnaise.

The standout on our visit is the Korean hot dog, which comes loaded with soy-braised bulgogi beef, mayonnaise and toasted sesame seeds. It’s a juicy, messy, joyous mouthful of salty-sweet flavours. Forget about trying to tackle it with the bamboo knife and fork provided – just cram that bad boy straight into your mouth.

Any of the hot dogs would constitute a full meal in itself, but if you do want a little something on the side, may we suggest the spicy buttermilk chicken tenders, or the truffle and parmesan fries?

While it’s early days for the Fabrique’s new locations, they already have plenty of plans afoot, adding deli sandwiches to the mix this month, and introducing a “monster dog for meat lovers” at the end of January.

They’re also producing beautiful charcuterie platters and barbecue boxes, which can be ordered via clip.chatfood.io/the-fabrique

Eat & Drink
Restaurants
EDITOR’S PICKS
UAE holiday dates announced for Eid Al Adha
READ MORE
Emirates extends suspension of flights from India to UAE again
READ MORE
Coming soon: Everything we know about Ain Dubai so far
READ MORE
Khorfakkan set to open new tourist attraction 580 metres above sea level
READ MORE
MOST POPULAR
6 brilliant hair and beauty deals in Dubai salons right now
There's an epic 2-for-1 deal on this new Abu Dhabi brunch
The next Regional Artist Spotlight rising star is: Moh Flow
Myrra by Opa launches Greek and Spanish Saturday brunch
Stargaze at night from Palm Jumeirah's sky-high observation deck
YOU SHOULD CHECK OUT
Our website uses cookies and other similar technologies to improve our site and your online experience. By continuing to use our website you consent to cookies being used. Read our privacy policy here.