The UAE is glittering with that A-list fairy dust…

The UAE is no stranger to a celebrity or two, and we’re loving the fact that they’re back. From pop stars to famous athletes and a series star to boot, here are the celebrities spotted in the UAE this week…

British professional boxer Anthony Joshua was snapped living it up at Cove Beach whilst in Dubai this week.

A post shared by La Mezcaleria at The Oberoi (@lamezcaleriadxb)

Breaking Bad actor Bryan Cranston was in Dubai last week to promote Dos Hombres (a mezcal beverage), which is a joint venture he founded with Jesse Pinkman actor, Aaron Paul. He served up drinks in a number of Dubai bars, including S Bar at SLS Dubai and La Mezcaleria. He also dropped into Expo 2020 and visited the gorgeous rooftop bar, Jubilee Mixology, on Monday, November 15.

The latest Love Island star Faye Winter has been snapped living it up in Dubai on a yacht.

Japanese celebrity chef Nobu Matsuhisa has been in the city to visit his restaurant, Nobu Dubai at Atlantis, The Palm. He also visited brand new restaurant SushiSamba.

French professional footballer, Paul Pogba, who plays for Premier League club Manchester United was back in Dubai where he was snapped with Chef Izu.

Pop superstar Perrie Edwards, of Brit girlband Little Mix has visited the city on holiday. She was staying at Raffles The Palm Dubai with her boyfriend and baby son. She posted a number of sun kissed snaps to her Instagram page, making the most of the winter sunshine. 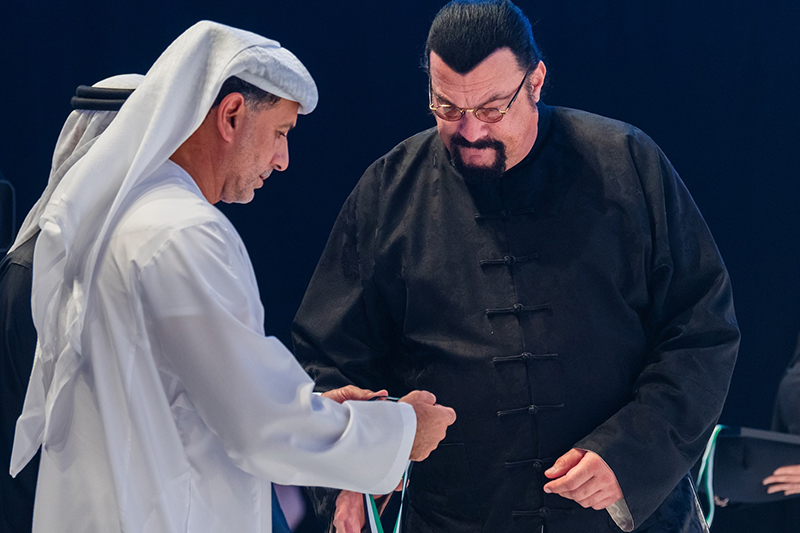 Hollywood legend Steven Seagal was at the Abu Dhabi World Professional Jiu-Jitsu Championship. As well as watching all of the action, Seagal crowned a number of champions in the blue and purple belt categories.

Celebrities
EDITOR’S PICKS
Here's the full list of UAE public holidays in 2023
READ MORE
23 incredible things to look forward to in the UAE in 2023
READ MORE
Hidden gems: 10 UAE desert pop-ups to discover this winter
READ MORE
Where to travel in 2023: 10 new flight routes from the UAE
READ MORE
MOST POPULAR
The Wizarding World officially comes to Dubai
11 homegrown UAE restaurants that have gone global
13 new brunches in Dubai that will spice up your February
You can now tour these 12 ladies' nights on Yas Island
Sweep your special someone off their feet at TH8 Palm Jumeirah
YOU SHOULD CHECK OUT
Our website uses cookies and other similar technologies to improve our site and your online experience. By continuing to use our website you consent to cookies being used. Read our privacy policy here.