In January we announced a new hospitality project that will be constructed in the Eastern enclave of Khorfakkan in Sharjah. The large-scale development project is a partnership between  Sharjah Investment and Development Authority (Shurooq) and Marriott International.

According to an announcement released by Shurooq, the project will include the building of a five-star hotel, the first waterpark in the Eastern Region, and more than 200 residential units. The 38,000 square meter project is scheduled for completion in 2024. 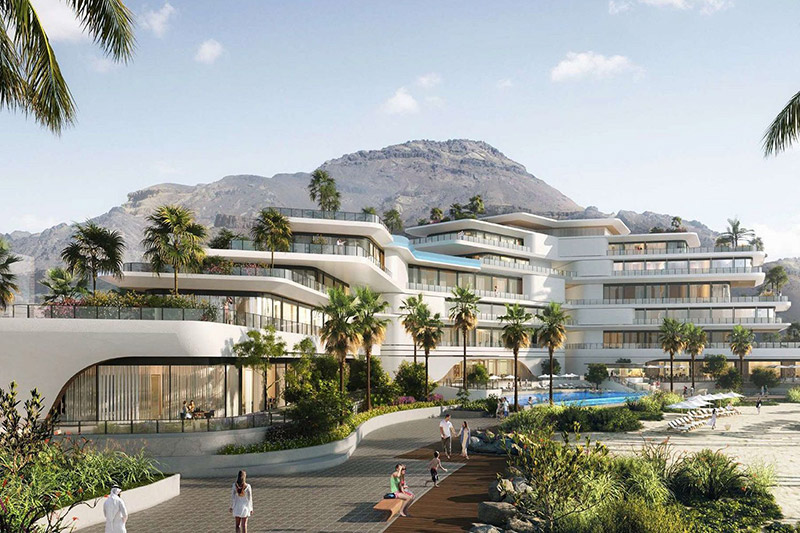 The five-star luxury hotel, operating under the Autograph Collection by Marriott International will be located opposite the Khorfakkan port. It will feature 75 deluxe units with views of the Arabian Sea, pools, restaurants, and a ballroom for special occasions.

Five Guys to open first Sharjah location later this year
5 unique staycations you will soon be able to try in Sharjah
CÃ´te d'Azur Monaco: You can now check-in to the first Heart of Europe hotel

The hotel has been designed to allow for maximum scenic views of the beach and mountain ranges maintaining privacy for guests at the waterpark privacy.  The hotel will be designed keeping in mind its surroundings for a seamless blend.

Ahmed Obaid Al Qaseer, Acting Chief Executive Officer of Shurooq added that the project will also include more than ‘200 residential units which will be serviced by retail stores, restaurants and a host of other outlets on the ground level.’ He added that a more detailed overview will be announced later this year.

Located close or opposite to the hotel, guests of the hotel can check out the first-ever waterpark on the East Coast. As of now, no details have been released but we will let you know as soon as we know more. According to the Shurooq, the waterpark will cater to the ever-growing demand for tourism and leisure experiences on the East Coast.

We may have a good two years for this hotel to open its doors, but remember, back in May 2022 we also announced five other staycation spots you will be able to enjoy in Sharjah when they open this year. You can read all about it here.

Staycations
EDITOR’S PICKS
Here's the full list of UAE public holidays in 2023
READ MORE
23 incredible things to look forward to in the UAE in 2023
READ MORE
Hidden gems: 10 UAE desert pop-ups to discover this winter
READ MORE
Where to travel in 2023: 10 new flight routes from the UAE
READ MORE
MOST POPULAR
16 incredible mega projects coming to Abu Dhabi soon
The epic Asian Le Mans Series returns to Dubai Autodrome this month
Snapped: Celebrities spotted in the UAE this week
With its unique decor, Dubai's La Nina restaurant evokes tales of distant travels
Reservations are now open for French restaurant Fouquet's Dubai
YOU SHOULD CHECK OUT
Our website uses cookies and other similar technologies to improve our site and your online experience. By continuing to use our website you consent to cookies being used. Read our privacy policy here.