The Dubai teen with A-list friends and a Dhs200,000 shoe closet

He’s a pal to rappers, collector of rare trainers, emerging businessman… but this 14 year old still has the some of the same problems as every other teen.

When it comes to small businessmen, Rashed Belhasa is literally just that.

At only 14 years old, the Emirati high-school student is a social media star, co-owner of a clothing label, high-end sneaker collector… and he’s only just getting started.

“Time is money,” he sagely advises when we visit his sprawling farm in Al-Khawaneej. This is a display of business savvy not often seen in those too young to vote.

“If you make videos, you get money,” he says when quizzed about how he spends his downtime (he doesn’t, FYI, he says always on the clock).

“You should never be free; if I go on vacation I just start making videos.”

His crazy work ethic is undoubtedly the key to his success, something he says his father, prominent UAE entrepreneur Saif Ahmed Belhasa (of Belhasa Driving Centre fame), has instilled in him. 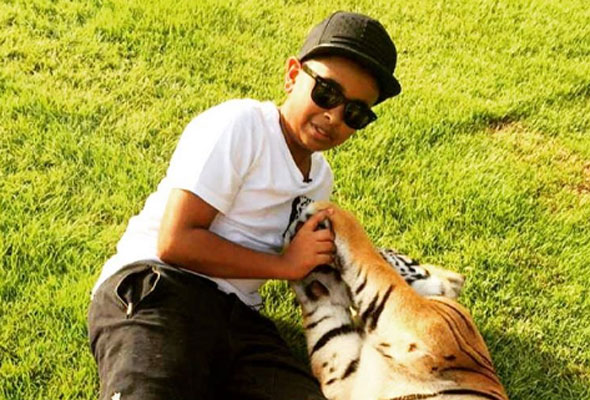 And that patience has paid off – not that he had to wait long. In the three years since Belhasa launched his Instagram account, he’s racked up over 135,000 followers, and he’s scored more than 100,000 YouTube subscribers in the six months his Money Kicks channel has been going.

The source of most of his fame? His already-iconic shoe cupboard (and by cupboard, we mean separate building kitted out with specially fitted shelves and CCTV) that houses a rare sneaker collection most kids his age would only ever dream of. 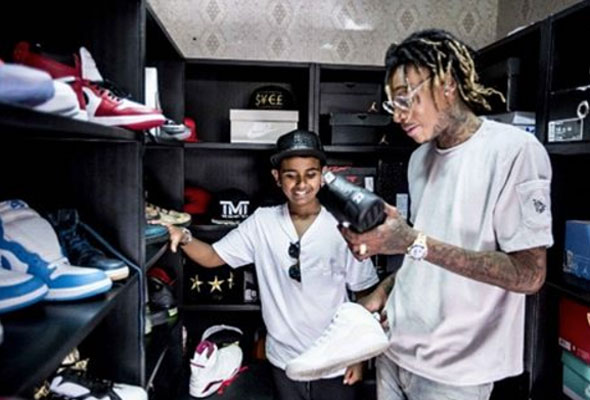 Belhasa hanging with Wiz Khalifa and his kicks.

“I collect them, I have another set in my house that I wear,” he says, estimating that he has about 200 pairs of trainers in total. “For me, [they’re] art.”

Belhasa first got into sneakers when his brother won a pair of Yeezy 350s – better known as the trainers designed by Kanye West – in a raffle.

“When he went into the mall, people were taking pictures of the shoes and I was like, ‘what the’?”

He started collecting because he “wanted the hype”, but now he sees it as a way to future-proof himself. 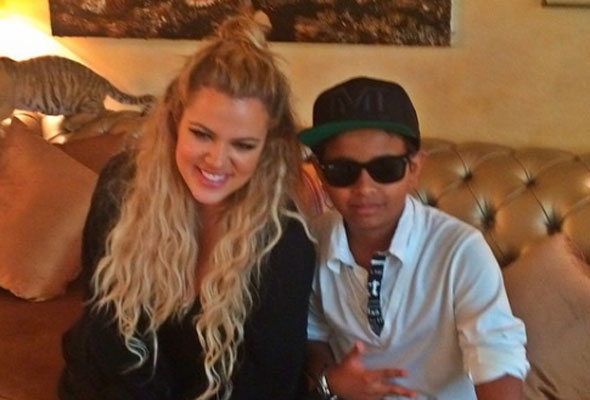 “I just buy every size [of sneaker]. I know in the future, if anything happens, this is my stuff – I can just sell it.” (Top tip: According to Belhasa, an 8 is the most lucrative size to get your mitts on if you’re looking to make a few bucks).

He’s now building a bigger, better home for his collection as part of the family farm’s renovation, a Back to the Future-inspired basement that he promises “will make a lot of people shocked”.

READ MORE
*8 places that will give people who grew up in Dubai major nostalgia*
*Sir Elton John and Selena Gomez are coming to Dubai*
*Hang on, Zayn Malik was in Dubai? Well, not quite…*

How the teen finds his next investment sounds like something out of Breaking Bad – “I have a guy, I call him my plug, he’s my connection” – and his most treasured find is a pair of sneakers autographed by Michael Jordan.

He bought them pre-signed, but says the basketball legend is the A-lister he would most like to meet, along with Kanye West.

“I would be shocked. I met Cristiano [Ronaldo], but I was not shocked, like ‘oh my god’, but maybe I would be when I meet Michael Jordan.”

Talking of which, forget the Burj Khalifa and the Palm Jumeirah – for celebrities passing through Dubai, Belhasa’s sneaker collection is one of the city’s must-visit attractions. 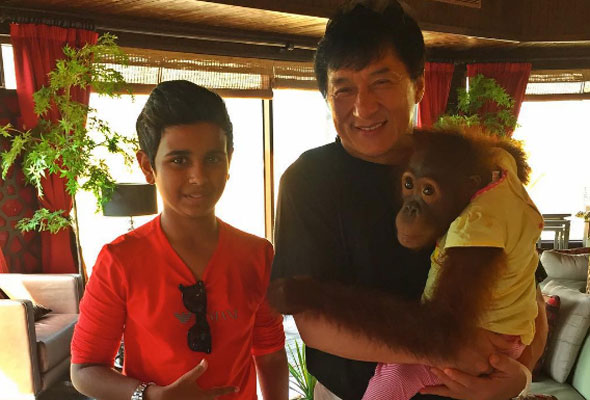 Belhasa with Jackie Chan (and orang-utan).

Such is the lure of Belhasa’s collection – as well as the farm’s resident menagerie of exotic animals – that celebrities actually approach him (well, his agent), hoping to pop round on their trip to the emirate.

But the teen says he’s never been star struck, and just tends to chat to these famous faces about sneakers and fashion.

“The people that I meet, I’m used to it. Me, I don’t want to take a picture, I want to build a contact, you know? When you build a contact, the next step is when you go to his country he’s going to invite you for a game [of football] or something, you know. You can make a good connection.”

Belhasa’s in regular contact with rapper August Alsina – “I talk with him every week, he’s really kind” – and still keeps in touch with Trey Songz and Tyga after their visits.

His next celebrity guest looks likely to be singer Chris Brown, who recently had to cancel a trip to the UAE after he “missed his private jet”. (The story of our lives). 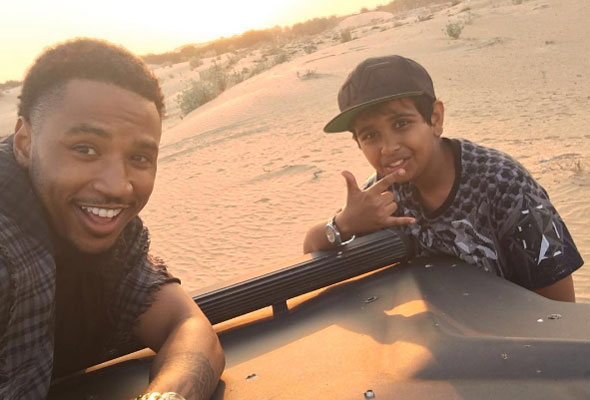 Belhasa out in the desert with Trey Songz.

So what’s next for this teen tycoon? Well, he’s outgrowing his sneaker closet, and plans to open a Money Kicks store within the next two years.

“It’s like a consignment [basically second-hand] shop. You come with a pair of sneakers, you want to consign them, I’ll get 10 per cent, he’ll get 90 per cent. There’s no consignment shop in the Middle East, so I want to be the first.”

But first his attention is on Kings Ambition, the clothing brand he co-owns with designer Ross Mackay. The streetwear label is available to buy online, and if you’re in Dubai, a driver will deliver it for free.

Belhasa mostly runs the social media side of the business, and says his contacts can help the pair “make it big”.

“The business is all about social media. If Justin Bieber were to wear Kings Ambition, our stock would finish.”

He still has to go to school, but manages to stay commendably grounded, with his social media endeavours taking a back seat to his studies.

“School is more important. I’ll come back from school, I’ll do my homework, and then I focus on my work,” he says. 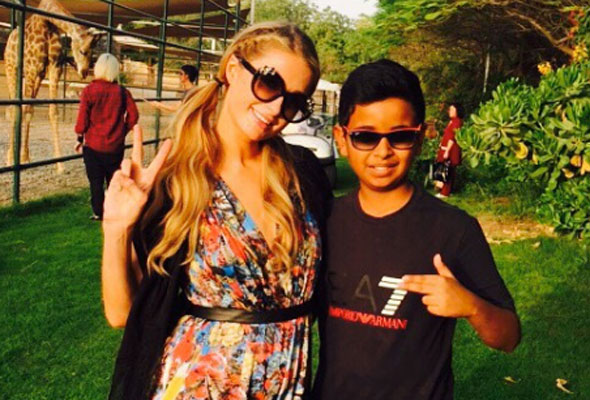 Belhasa with Paris Hilton at the family zoo.

Belhasa’s “Rich Kid” lifestyle might have attracted plenty of fans, but with the praise also comes the criticism. However the teen finds it easy to brush off the trolls, saying his family makes sure to distribute their wealth.

“There’ll always be haters,” he says. “In our religion, we have to give to the poor, so we give back. We give them food – last time we did iftar things with [UAE video blogger] Mo Vlogs, we gave around 200 people food.”

READ MORE
*The ultimate ’90s supergroup Boyzlife is coming to Dubai*
*Dubai is getting more expensive (compared to the rest of the world)*
*Heard a rumour about something in Dubai? Here’s how to clear it up*

The family also use some of their cash to take in abused exotic animals and rehabilitate them at their resident farm.

“We rehabilitate them here, cure them, [then] release them into the wild,” Belhasa says, revealing that the zoo has reintroduced around five animals back into nature so far.

“And some we take in here and keep them. If they go back, they’ll die because they’ll not be used to it. Here they eat every day – in the wild they eat maybe twice a month, once a month.” 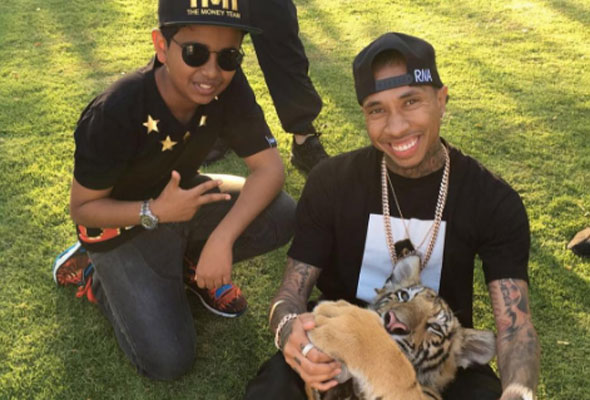 Belhasa with Tyga and tiger.

But despite the money, the fame and the celebrity pals, this is still just a teenager with teenager’s problems.

Belhasa might let chart-toppers into his wardrobe, but he’s got ban on one group – his three brothers.

“Are they allowed to borrow my shoes? No, no – that’s why there’s a camera over there.”

And just like that, you remember one of the UAE’s emerging entrepreneurs is still just 14.